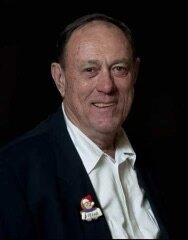 75, of Redington Beach, FL, passed away August, 2022. Wally was a devoted husband, a fun loving man who made friends easily, and the beloved patriarch figure to his extended family. From his early years in Gulfport Little league, through his basketball career at Boca Ceiga High School, he made friends easily and kept them throughout his life. After study at St. Peterburg College, Wally enlisted in the Navy where he served in the Personnel Division, received three medals and rose to Petty Officer third class, the highest rank allowed during his enlisted service. He served two years active and six years inactive, and paid the ultimate price for his time in Vietnam, as his exposure to Agent Orange there ultimately led to his demise. Returning home, Wally managed a staff of 100+ people at Pinellas Lumber Company, as VP, making his presence felt in West Coast building industry. Wally also garnered the title of VP in the St. Petersburg Jaycees, where he specialized in teaching children to fish and sponsoring tournaments. Wally’s next avocation was to become VP in Thomas Lynch and Associates, National Sales Reps for Norelco, Sales, Florida, making new friends all along the way.

In 1987, Wally and his wife, Lynne, founded Santa’s Angels, and became a VP again for 35 years, and remained devoted to that position to the very end. Wally concentrated his efforts in the acquisition and distribution of food that to this day is delivered to families on a bi-weekly basis in a quantities that can feed a family for the next two weeks. He amassed a cracker jack crew of ladies that did the selecting and organizing the boxes of food and helped to coordinate the people who handled the deliveries – in addition to managing the Santa’s Angels Christmas Programs that delivers toys to children.

Wally recently joined the Elks Club, Madeira Beach where he once again involved himself with fishing tournaments for young children which was a highlight for him, along with the twin bedding and backpack programs. Alas, he was not there long enough yet to become VP. However, Wally loved his boat “AT EASE”, fishing with his friends who he would occasionally treat to his homemade Fish Spread, and here, Wally wasn’t VP, he was CAPTAIN!

Wally had a sense of humor that allowed him to make and keep lifelong friends. He was a big man whose presence filled a room like beer fills a glass; colorful and frothy. You always knew when Wally was in the room. We hope Heaven needs more VP’s!

Wally is survived by his wife, Lynne Hawthorne, sister-in-law, Eileen Wolff (who was also his nurse until the end), his sister-in-law, Carol Bartow and his niece, Victoria Wolff.

Services will be held for family and friends at Bay Pines cemetery. A Celebration of his Life will be held at a later date. In lieu of flowers we encourage you to make a donation to Santa’s Angels.

To send flowers to the family or plant a tree in memory of Walter Hawthorne , please visit Tribute Store

Share Your Memory of
Walter
Upload Your Memory View All Memories
Be the first to upload a memory!
Share A Memory
Send Flowers