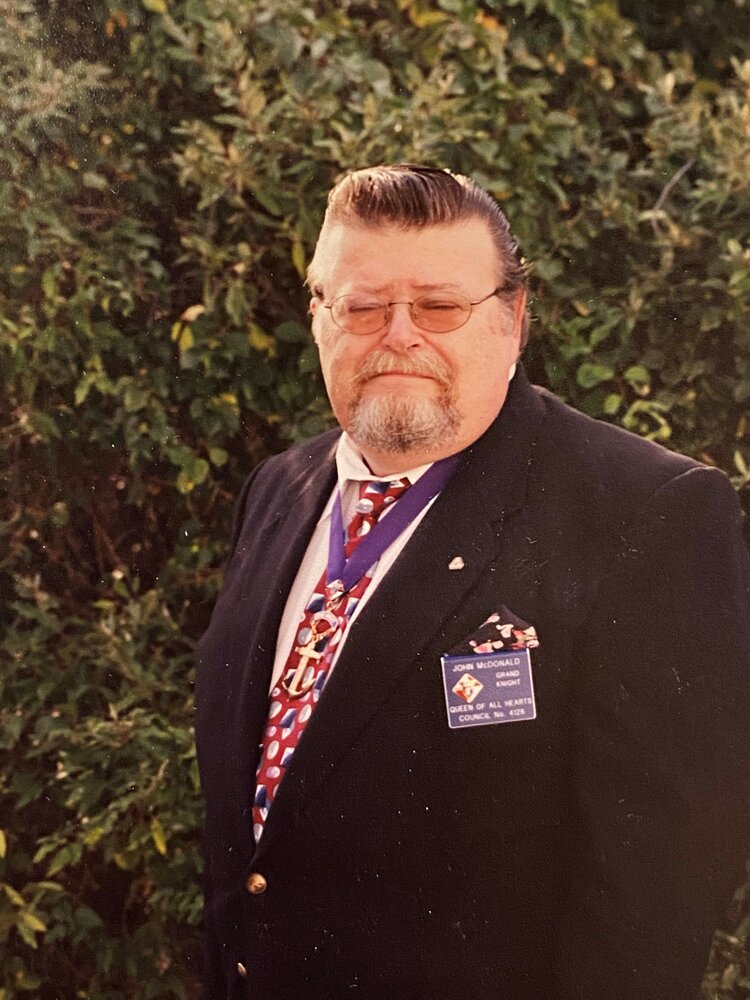 John was born on August 2, 1946 to the late John C. “Jack” and Ruth M. (Hermann) McDonald in Queens, New York.  He was a beloved and dedicated husband, father, grandfather and great grandfather.

John was a proud 30-year veteran of the United States Navy, retiring at the rank of Chief Yeoman (YNC E-7), known fondly as “Chief Mac” among his crew.  He patriotically enlisted at the age of 17, and rose through the enlisted ranks. His duty stations traversed the eastern seaboard, where he and his family made countless friends and memories.

John was strong in his Catholic faith.  During his youth, he served as an alter boy at St. Adalbert Church in New York.  Throughout his adult life, he showcased an undeniable devotion to the Knights of Columbus organization, eventually ascending to the highest position of Grand Knight.

During his retirement years living in Florida with his wife Wendy, John enjoyed playing golf and socializing as often as possible at the Clearwater Country Club.  He was an avid sports enthusiast especially following NY Mets, Golf and the WWE.  John was a man of high values and had a lust for life.  He had a tremendous heart and a cherished adoration for his family and friends.  In recent years, John was thrilled to host his entire family for Christmas festivities in Florida.

In addition to his parents, John was preceded in death by his wife Karen A. (Steuer) McDonald of 32 years; and his granddaughter Amber Joye Macomber.

There will be a gathering with memorial service held at A Life Tribute Funeral Home in Largo, FL on Wednesday, April 13th from 2-4PM.

Visit his online guestbook at ALifeTribute.com

Reposing to be held at Robertaccio-Wesche Funeral Home in Center Moriches, NY on Thursday, April 21st from xxxx and xxxx; Mass at St. John’s RC Church in Center Moriches, NY.  John will be laid to rest with his wife, Karen A McDonald at Calverton National Cemetery on April 22nd at xxxx.  John’s smirk, sense of humor, laugh and quirky nicknames for others will never be forgotten.  His family will miss him tremendously.

To send flowers to the family or plant a tree in memory of John McDonald, please visit Tribute Store
Wednesday
13
April

Gathering of Family and Friends