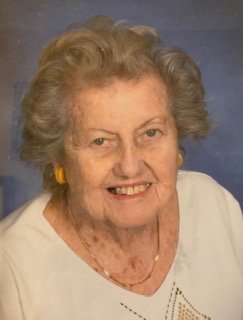 Born in Chicago, IL on August 16, 1922 to Florence Wilton Kelly and William Kelly. She had one younger sister, Joan Kelly Barrett who predeceased her.

After World War II she married George J Mercer when he returned from Europe with the Army Air Corp.

After George’s death in 1967, Dorothy met and married Jerome (Jerry) Whalen. Jerry was the Fire Chief for downtown Chicago. They were married in November, 1970. After retiring they moved together to Point Brittany condominiums in St. Petersburg. They were very active golf members of Lakewood Country Club (now St. Petersburg Country Club).

She is also survived by three great grandchildren and numerous nieces, nephews and cousins.

In lieu of flowers, donations may be made to the American Cancer Society.

To send flowers to the family or plant a tree in memory of Dorothy Whalen, please visit Tribute Store
Saturday
28
August

Share Your Memory of
Dorothy
Upload Your Memory View All Memories
Be the first to upload a memory!
Share A Memory
Send Flowers