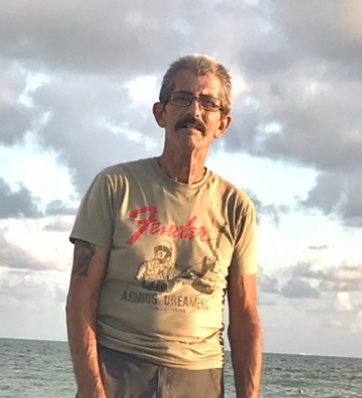 He graduated Redford Union High school & was a long-time resident of Livingston county Michigan. He moved to St Petersburg in 2018.

John was an Army veteran with a heart of gold. He was a master finish carpenter and was excellent at his craft. He loved music and spent many years as a lead guitarist with his band, Nucleus. John also loved animals and they loved him the same. He enjoyed spending time at the beach and waterskiing and truly knew how to enjoy the journey of life every day.

His wife misses him more than words can say.

He left behind his wife, best friend and soulmate Deborah of 35 years and his cat Ziggy, who was his best buddy.

John was predeceased by his Father and Mother Leroy and Joann Young.

Survivors include his wife Deborah, his daughters Lisa and Dave Baker, Wendy Jobson, his grandchildren Jade Zilisch and Devon Jobson. Also his brothers Mark, Ed & Pat Young and his sister Karen and Kevin Shroyer, along with many nieces and nephews.

He will also be missed by his in-laws Richard, Susan & Lisa Colone.

A remembrance gathering is anticipated later this year.

To send flowers to the family or plant a tree in memory of John Young , please visit Tribute Store

Share Your Memory of
John
Upload Your Memory View All Memories
Be the first to upload a memory!
Share A Memory
Send Flowers