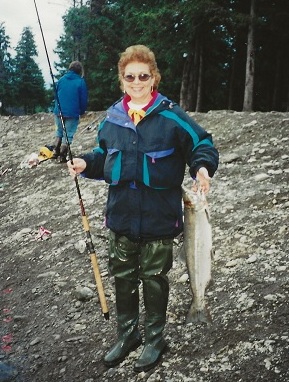 Freda Dean Chicarell, known as “Snowball” to her father, passed away on December 31, 2020.  She was born on February 26, 1942 in Ona, West Virginia to Horace C. Dean and Esta G (Smith) Dean.  She graduated from Milton High School in Milton, W. Va. In 1960.  Freda married and was mother to Doni Regina and Christopher Howe Chicarell.  They traveled and lived in Japan and the Philippines and she eventually found her way to Clearwater, Florida where she worked as a loving and compassionate Home Health Care Nurse.

While in Japan, Freda studied the Art of Ikebana Flower Arranging and continued the art as a lifelong passion.  She loved to cook and was famous for her biscuits and gravy, chicken and dumplings and everyone’s all time favorite, spaghetti sauce.  One of her most favorite joys was fishing in Alaska where she would always be the last one left on the river and you could hear her say over and over, “Just one more cast!”

Freda was a loving mother, grandmother, sister, aunt and friend. She was loved deeply by all and will be missed greatly. She is survived by her daughter Doni Regina Chicarell and grandson Blaise Chicarell Thompson and her son Christopher Howe Chicarell and her granddaughters Annalese Mary-Faye and Savanna Grace Chicarell.

To send flowers to the family or plant a tree in memory of Freda Chicarell, please visit Tribute Store

Share Your Memory of
Freda
Upload Your Memory View All Memories
Be the first to upload a memory!
Share A Memory
Send Flowers