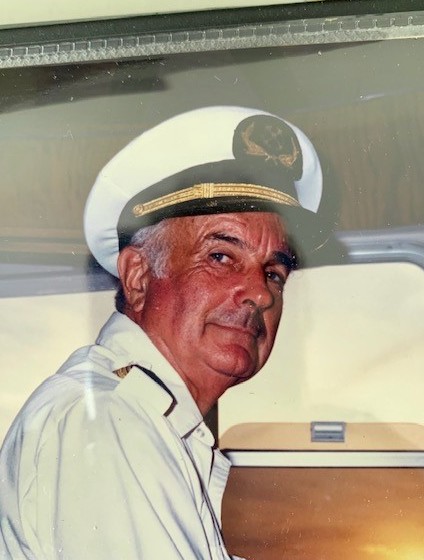 Francis James Creamer was born in New Haven, Connecticut on July 25, 1927, to Alfred and Olive Creamer.

He found his love for the sea along the shores of New Haven, A boat builder and wood craftsman, he built four boats and owned over thirty!

He graduated from West Haven High School, and being a TB survivor, he was ineligible for service to his country, and went on to graduate from St. Raphael’s Hospital with a degree in Radiology.

Frank moved to Westerly, Rhode Island in 1952 to start the X-ray department of the Westerly Hospital, retiring in 1981.

As the owner of Marine Tours Inc., he captained the “Adventure” in Mystic, Connecticut, before moving to Dunedin, Florida to run his new vessels, “Flamingo” and  “Show Queen,” on Clearwater Beach. Frank hung up his Captains hat in September 1993.

Frank was a Boy Scout leader and a thirty year member of the Westerly Yacht Club, serving on the Board of Directors in the ‘70’s. He belonged to the Brasstown Woodworkers in North Carolina, where he and Elaine had a summer home.

In retirement, he and Elaine traveled the country in the motorhome, seeing the beautiful wilderness, he so loved.

To send flowers to the family or plant a tree in memory of Francis Creamer, please visit Tribute Store

Share Your Memory of
Francis
Upload Your Memory View All Memories
Be the first to upload a memory!
Share A Memory
Send Flowers