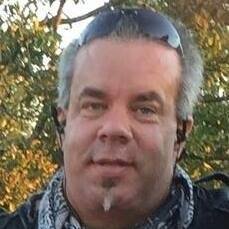 On Tuesday, December 10, 2019, Mark R. Bjorkman, loving husband and proud stepfather of two children, suddenly passed away at the age of 53.

Mark was born on October 19, 1966 in Washington State to Carl and Judith (Selden) Bjorkman. Mark had a formal college education and owned his own business for many years centered around programming and web design. In recent years Mark was also employed as a class G security guard with ESS Global & Steinbrenner Field. Mark met the love of his life Marylou Wolf in 2008. They later married in a castle on the ocean.  They supported their two stepchildren, Beth and Jacob, up until his untimely passing.

Mark had a passion for music. He used to be a touring guitarist and regularly listened to metal music in his downtime.  He was fond of motorcycles and cars and regularly went riding with his wife on their custom motorcycles. Mark was known to be fond of both Viking and biking lore. Mark was also an enthusiastic gardener.  He was an avid dog lover and kept dogs in some capacity for most of his life.  While not known as a religious person he was attending multiple churches in the area and was showing a great interest in Christianity.  He even volunteered at Grace Family Church for a time. Mark loved and cared very much for his friends and family.

Mark is survived by his wife,  Marylou (Tobuch) Bjorkman, his stepchildren, Beth Wolf, Jacob Wolf,  his mother Judith (Selden) Bjorkman, his brothers, Ted, Mel, and many friends and family. Mark was preceded in death by his father Carl. There will be a private memorial for family only.  Monetary assistance and donations are welcome.

To send flowers to the family or plant a tree in memory of Mark Bjorkman, please visit Tribute Store