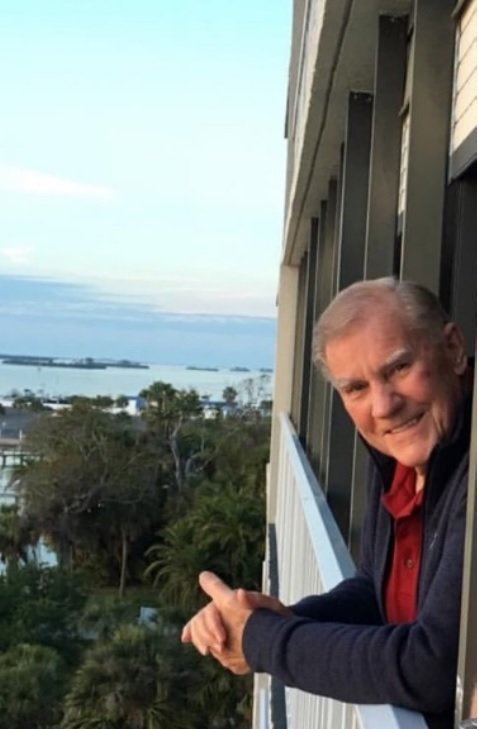 Frank Robert Gleason, 83, a loving and devoted husband,father, “Pah”, and friend to all whose lives he touched passed away on Thursday, July 25, 2019. He was surrounded by his devoted family when the Lord called him home.

Frank was born at home on October 15, 1935 in Pioneer Township, Iowa. He was preceded in death by his Father, Oscar Franklin Gleason, his Mother, Dorothy Stoneking Gleason, his brothers, Dale and Paul, his sisters, Phyllis and Jean, and great-grandson, Maverick. Frank is survived by his wife of 59 years, Susanne Webb Gleason, his children Rebecca “Becky”, Nancy, Frank Jr. “Chip” and Emily, his sisters, Joan, Connie, and Linda, his eight grandchildren, Jessica, Natalie, Michael, Andrew, Katie, Kylie, Maggie and Corey and his six great grandchildren, Madyx, Greyson, Beckham, Kaycee, Landon and Sawyer.

In 1953, at the age of 17, Frank enlisted in the United States Navy where he served 3 years on the USS Klondike (AD-22). Frank enjoyed over sixty years working in various capacities with distinguished companies including Gulf Oil, Darby Oil, and Del Papa Distributing. His career took Frank and his family to many states, including Iowa, Michigan, Indiana, California, Minnesota, Illinois and Texas until he retired and settled in Clearwater, Florida. He truly loved his work and cherished the many lifelong friendships he made along the way.

Frank enjoyed the outdoors and nature; whether it be spending time on the farm in Indiana, fishing, hunting in South Dakota, relaxing with his friends on the ranch, or sitting and looking out at the water and wildlife from his condo’s balcony in Clearwater, Florida. He loved to travel; it didn’t matter where. He enjoyed all sports including auto racing, golf, hockey and baseball. His greatest joy was watching his children, grandchildren and great-grandchildren play hockey and baseball and attending every swim meet.

What he loved most was his family. He was a family man in every sense of the word. Frank was a passionate, loving, kind and thoughtful man who has left a permanent mark etched upon our hearts and will be deeply missed forever. He had the amazing ability to immediately connect to those he met and make a person feel as though they had been friends for years, even if it had only been minutes. He had a great laugh - one that could never be imitated. When he laughed, his eyes lit up. We will miss that the most. He was proud and honored to be a husband, father, grandfather and great-grandfather to our family. His life was well lived, and he was well loved!

The family would like to thank the doctors and nurses of Morton Plant - Morgan Heart Hospital in Clearwater, Florida for their great care and compassion while he was in the hospital.

A Celebration of Life will be held at a later date to honor Frank in Greencastle, Indiana. Details will be shared in the future.

In lieu of flowers, it was Frank’s wish that donations be made to the American Heart Association or the American Cancer Society in his name.

To send flowers to the family or plant a tree in memory of Frank Gleason, please visit Tribute Store
Print
Share A Memory
Send Flowers