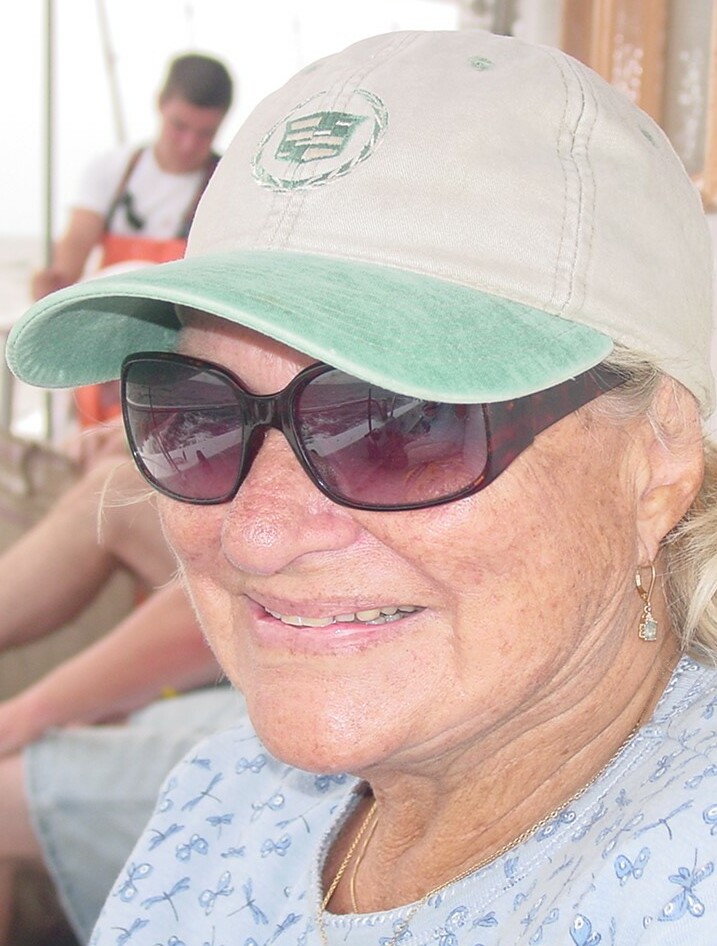 Rita was extremely active for 88 of these years.

Rita married Dexter Dahlman October 7,1951. They were together for 24 years and raised their four children, Bobby, Billy, Charlie, and Lorraine in Niantic, CT.

Her next chapter included a lifetime partner, George Ferguson and lasted over thirty years. Rita and George loved to travel. When they weren’t with their families and friends during holidays, they were traveling around the world, or camping in Virginia, and North Carolina until George passed away in 2014.

Rita has kissed the Blarney Stone, walked the Great Wall of China, boated to the Bahamas, and landed a Marlin. She loved cruises, and traveled everywhere, from the Caribbean to Mexico, and Alaska. She earned her USCG Captains License, and with George, ran their own charter business in Ft. Lauderdale, FL. In 1980, they participated the Mariel Boat Lift from Cuba. She then built a summer home in Nags Head, NC with her son, Charlie.

During this amazing adventure, she found time to enjoy the arts, by creating dozens of oil paintings, and supporting Ruth Eckerd Hall in Clearwater, Fl. for fourteen years as a volunteer.

Rita was a devoted mother. She and her daughter, Lorraine were inseparable. They traveled on cruises to Alaska and the Caribbean. Rita and Lorraine were together nearly every Christmas, Thanksgiving, birthday, anniversary throughout Lorraine’s adult life. Rita made yearly trips to Niantic, CT to be with her son, Charlie, during the later years of his life. She maintained contact with her son, Billy over the years, and frequently visited Bobby until he passed away. She loved her grandchildren, and attended their graduations, weddings, and celebrated many birthdays and holidays.

Rita loved her four-footed children, as well, spending hours walking and playing with them on beaches and in parks.

Rita is survived by her daughter, Lorraine Barry of Cocoa, Florida, and a son William Dahlman of St. Petersburg, Fl., sisters, Lucille, and Carolyn and a brother, Ernest. She has grandchildren; Major Wesley Dallan Snow of Tysons Corner, VA, Robin Dean Snow of Weirton, WV, Zachariah Dahlman and Cindy Robinson of Royce City, TX; five great-grandchildren, and many other family and friends.

Rita is preceded in death by her parents, Ernest and Lillian Brown, Dexter Dahlman, George Ferguson, and her sons, Bobby and Charlie.

The family of Rita Dahlman wishes to thank everyone for their love and support, and plan to celebrate Rita’s life privately at a later date. Condolences can be sent to Lorraine Barry 6920 Song Dr., Cocoa, Fl 32927.