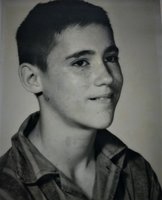 A memorial service will be held at a later date.   Arrangements by Alife Tribute Funeral Care in Gulfport FL.